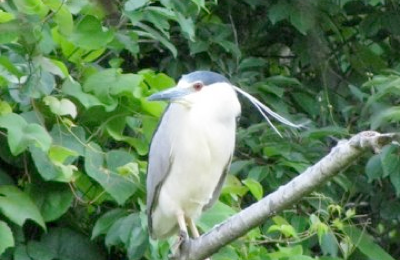 Standing here by our freshwater pond is a special spot in itself, but since our Rejuvenation Project has started, we have seen the first signs here of nesting and roosting activity by a very special Colonial wading bird…the Black Crowned Night Heron.  These birds have not been present in the Sanctuary since 1993.  If we are lucky enough to see one, you may notice their “Breeding Plumage” has special trails of white feathers draping down from their “crowns” to beyond their back…these are used to attract mates !  (The feathers were once used ornamentally, but banned for that use in 1910)

The Black Crown Night Heron is a Threatened Species in the State of New Jersey, largely because of the loss of coastal habitat, and maritime dune forests such as this one.  Once common to the area, the population has now dwindled to about 200 pairs in area rookeries….so we are very excited to have these birds back home in our Sanctuary.  Here around the pond you can actually see “streaking” in the leaves of the surrounding trees …evidence that the birds have been hanging around this summer, and eating well !!  (White, paint-like streaks in leaves of the surrounding trees on N and S side of pond).

We believe there may be up to about 6 nesting or roosting pairs here this summer, (along with their friends the Yellow Crowned Night Heron).  Black-crowned night-herons do not fit the typical body form of the heron family. They are stocky and about 25 inches tall with shorter bills, legs, and necks than their more familiar cousins the egrets and “day” herons. Their resting posture is normally somewhat hunched.

In the evening they fly off to hunt fish in the adjacent wetlands and stream and “grasp” fish with their broad bills, eating, and regurgitating stomach contents to feed their young !  yum! As the chicks grow, the parents will begin to feed whole prey to them.   The noisy begging of the nestlings can create quite a din in some of the larger breeding colonies. At three weeks, they begin to climb about and around the nest, and the juveniles will fledge at six to seven weeks of age.

Young Black-crowned Night-Herons often disgorge their stomach contents when disturbed. This habit makes it easy to study its diet.

The Black-crowned Night-Heron may nest in the same tree with ibises or other herons.

Adult Black-crowned Night-Herons apparently do not distinguish between their own young and those from other nests, and will brood chicks not their own.

When the Black-crowned Night Heron courts a mate, they don’t get “cold feet,” they get “red feet.” Once a match is made and a bond formed, their leg and lores (space between eye & bill ) fade to a blushing pink.

They build their nests with sticks and twigs, but leave the bottom of the nest very thin, so the parents can see the eggs / chicks even if they are foraging on the ground.

XThe owner of this website is committed to accessibility and digital inclusion. Steps are being taken to correct issues and to conform with WCAG 2.1 AA Web Accessibility standards. Automatic and manual testing is ongoing.

XThe accessibility of our website is taken very seriously. We strive to meet WCAG 2.1 AA Web Accessibility standards by routinely evaluating our website using automated evaluation tools and manual testing when required. As content changes we review and correct issues and are responsive to our users needs. If you encounter issues with our website, please report them so they may be corrected in a timely manner.